Behind The Scenes of NodeFlair's Newly Launched Salaries Feature (Part One) 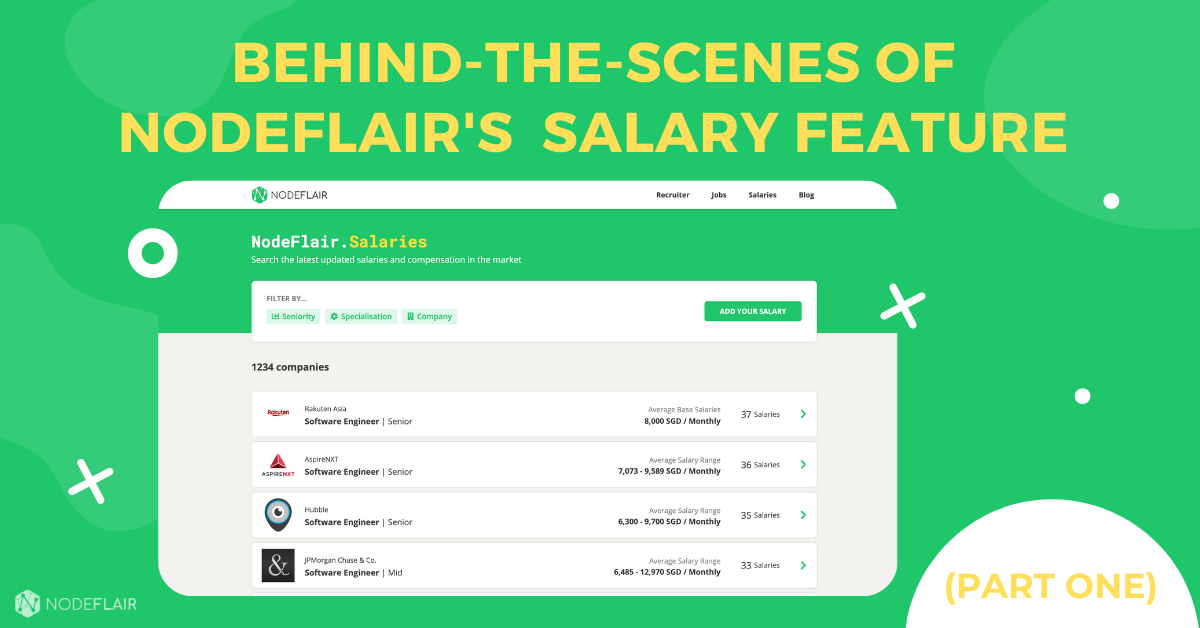 How did the team at NodeFlair build its groundbreaking Salaries Feature? We sat down with Adrian, the co-founder of NodeFlair who oversees Product & Engineering, to share the story behind the idea, design process and challenges.

NodeFlair Salaries is a feature on the NodeFlair website, which allows job candidates to look up the latest updated salaries and compensation in the Tech market. Candidates will also be able to filter salaries according to Seniority, Specialisation and Company over thousands of jobs, allowing for a more tailored experience in the click of a few buttons!

How did NodeFlair come up with the idea?

We started NodeFlair with the mission to empower developers to code at where they love, and by connecting them with companies to secure their dream job. After speaking to users, we realised that securing jobs were not the only pain points they had - in fact, the whole recruitment journey was something they needed help with too.

While talents care about factors such as company culture and the type of work, salary compensation is another crucial factor. Based on the team’s research, 90% of talents care about salary details when switching jobs, among which 66% would check online sources for further research. Unfortunately, it is difficult to research salary compensations because first, companies don’t often disclose the salary in a job listing. Second, most talents don’t trust existing information sources out there, be it due to lack of an employee verification system or biased reviews. And of course in Southeast Asia, discussing salary openly may be perceived as a taboo.

As such, it is not uncommon for people to undergo several rounds of interviews with a company, only to find out that it’s unable to match their salary expectations. This is a huge waste of time! This is where NodeFlair Salaries comes in to provide users with trustworthy and reliable salary information.

Walk me through the design process of NodeFlair Salaries

As with every new product, we start off by speaking to our users and learning how they currently solve their pain points, which in this case is finding out company salary information. From here, we are able to understand the gap in the market, and figure out how we can solve their frustrations. This requires lots of research, as you can see in the following image!

We also drew out some mockups as shown below, and quickly built a prototype to be tested among users and receive feedback - all within two weeks! After this, we proceeded to work on the next iterations and make improvements based on this feedback.

What are some of the challenges faced when building NodeFlair Salaries?

One challenge is building the product around trust and communicating trust through the product. Having fewer, trusted data is more valuable than an abundance of dirty data with questionable integrity.

Currently, there is a vast amount of data from different sources such as user submissions and past job listings. These data have different degrees of accuracy and trustworthiness, and may not be as available for all companies and job types. The challenge is to carefully curate these data and remove any noise, and to retrieve the most accurate and useful salary information possible.

How did the team overcome these challenges?

As the product’s success is community-driven, we want to actively communicate accuracy and anonymity across it from day one. Nothing is more trustworthy than salary details that we can verify, so user-submitted data has to be accompanied with verifiable documents such as offer letters or pay slips. We also clearly annotate the differences between user-submitted data and data from past job listings.

Of course, it will be challenging to encourage users to submit these documents, as mentioned above that sharing about salary is a taboo topic. Hence, we will have to design the product in a way which ensures anonymity is not compromised. User-submitted salaries are rounded off to the nearest whole number, and sensitive information such as names, contact details and official work titles are removed.

Below is a screenshot of what users will see when contributing their salary information.

What are your visions regarding the future of NodeFlair Salaries?

We are grateful to have a group of active users who we are in constant contact with, and they are the first to hear when we launch a new product or feature. We’ve also reached out to more users who we thought would find the products useful, and invited them for beta testing. From these, we mostly received positive responses! We are also currently exploring tools which will allow us to receive incoming feedback from new users in the future. This is why we pride ourselves as “For developers, by developers”.

We want Tech talents to see NodeFlair Salaries as the go-to for researching trustworthy and reliable salary information. We also want NodeFlair to be a place which embraces a set of shared goals in improving salary transparency, not just by consuming this information, but also contributing to it. As we take privacy very seriously and aim to protect the identity of users through various means, I believe this will reduce the friction of salary discussion significantly.

Low-balled on salary during Offer?

Tips
|
The Main Difference Between Software Engineers and IT Support
Here's why you should stop asking Software Engineers to fix your mouse!
Tips
|
StashAway vs Endowus: which is the better company to work for?
Which company would you want to work for?
Tips
|
Working From Home? Here are the Digital Tools you need to work Smarter Remotely
Digital Tools to help you WFH like a boss.