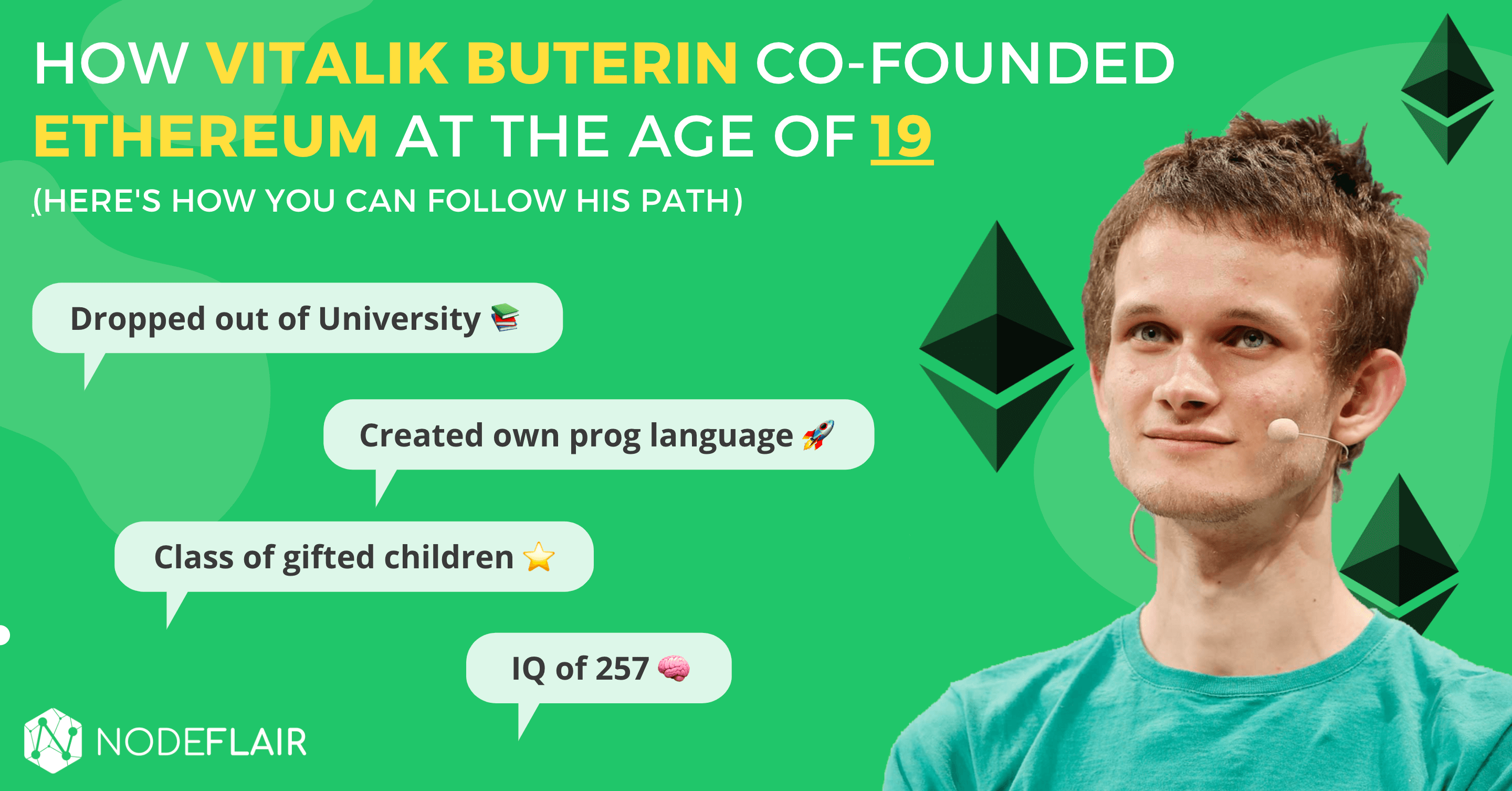 When you think of Ethereum, Vitalik Buterin, a Russian-Canadian programmer and writer comes to mind. Best known as one of the co-founders of Ethereum, the cryptocurrency coin founded back in December 2013 and currently on a meteoric rise.

The coin is described as a “decentralised mining network and software development platform rolled into one" that facilitates the creation of new cryptocurrencies and programmes that share a single blockchain. You can view it as the Android or iOS of the crypto space.

The future of cryptocurrency involves blockchain technology. One of the most crucial aspects of blockchain is the elimination of reliance on intermediaries heavily present in the current digital economy. With the rise of blockchain, we will see more growth and potential to be discovered.

Let’s dive into the empowering story of Buterin, how he paved his way into crypto and created Ethereum, and other notable factors.

What’s the Childhood of a Crypto Billionaire, Vitalik Buterin, Like?‍

Born in Kolomna, Russia, to Dmitry Buterin, a computer scientist, and Natalia Ameline, Buterin lived there until he was six. His family emigrated to Canada where Buterin was placed into a class for gifted children and was drawn to mathematics, programming, and economics.

He went on to attend the Abelard School, a private high school in Toronto. After graduation, Buterin enrolled into the University of Waterloo which he eventually dropped out after a year of computer science and landed the Thiel Fellowship. He used his time to co-found and work on several startups in cryptocurrency and digital finance. He’s also well-known for having an IQ level of 257.

Founded in 2011, the Thiel Fellowship’s mission is prominently defined by its tagline on its website: “Two years. $100,000. Some ideas can't wait.”

Are you a blockchain engineer looking to achieve the next big thing? During the course of the two-year program, Fellows receive $100,000 and mentorship from the Thiel Foundation’s network of technology founders, investors, and scientists. “If you want to be optimistic about the future, just look at what young people are creating now,” said Allyson Dias, director of the Thiel Fellowship. ‍

Buterin is now the world's youngest crypto billionaire. Buterin owns approximately 334,000 Ether, which were trading for just above $3,415 per coin as of May 2021. At that value, his wallet is worth about $1.14 billion.

When Buterin was 17, he learned about Bitcoin from his father in 2011 who has a membership management software company that he grew from $0 to $10M. At the University of Waterloo, where Buterin was a student, he took advanced courses and was a research assistant for cryptographer Ian Goldberg, who co-created Off-the-Record Messaging and was the former board of directors chairman of the Tor Project.

Buterin began writing in 2011 for a publication called Bitcoin Weekly. The website eventually shut down due to insufficient revenue. Later, Mihai Alisie co-founded Bitcoin Magazine with him where he continued to contribute as a leading writer.

He also held a position on the editorial board of Ledger, a peer-reviewed scholarly journal that publishes full-length original research articles on the subjects of cryptocurrency and blockchain technology.

Buterin wasn’t interested in Bitcoin the first time he heard it and regarded it as a currency with no intrinsic value as doomed to fail. The second time changed the world as Ethereum grew to become the world’s second-largest cryptocurrency after Bitcoin. How did this become a reality?

In 2013, Buterin, who was 19 years old, flew to visit developers in other countries who shared his enthusiasm for code and inspired a movement. He returned to Toronto later that year and published a white paper proposing Ethereum, before the project's launch in 2015.‍

Buterin’s Most Notable Awards and Achievements‍

Buterin said in his student testimonial at the Abelard School: "I am truly grateful to have the opportunity to work in such an interesting and interdisciplinary area of industry, where I have the chance to interact with cryptographers, mathematicians and economists prominent in their fields, to help build software and tools that already affect tens of thousands of people around the world, and to work on advanced problems in computer science, economics and philosophy every week."‍

Are You the Next Blockchain Mastermind?

Simplicity, Universality, Modularity, and Agility. These are the four design principles that developed Ethereum.

Besides English and Russian, Buterin can speak in many different languages like French, Cantonese, Ancient Latin, and Ancient Greece. As the lead developer of Ethereum, he is also well-equipped with programming languages like Pascal, C++, Basic, Javascript, and many more.

He created his own programming language in Solidity for Ethereum. It is a curly-bracket language influenced by C++, Python, and JavaScript. Solidity is an object-oriented, high-level language for implementing smart contracts. Smart contracts help govern the behaviour of accounts within Ethereum. Want to learn Solidity code? Watch this: Learn Solidity: Full Course For Beginners.

There are also new entrants like Simplicity and CX programming languages that blockchain use. Based on the type of development you have in mind, you can develop your skills for it and build different forms of Blockchain and cryptocurrency-based solutions.

"When I came up with Ethereum, my first first thought was, okay this thing is too good to be true," Buterin says. "As it turned out, the core Ethereum idea was good, fundamentally, completely, sound.”

Web design and app development and programming are the key skills to help you develop better decentralised applications (Dapps) if you want to work in an ETH-based company. Blockchain has changed the technology industry and new jobs are surfacing. If you’re interested in becoming a blockchain developer, take a look at some resources by Ethereum:

Our growing community of 800+ tech talents have already submitted their salary data. Put an end to the opaqueness here in Singapore and bring the power back to yourself!