Microsoft vs Google: Which is the best company for engineers to work for?‍ 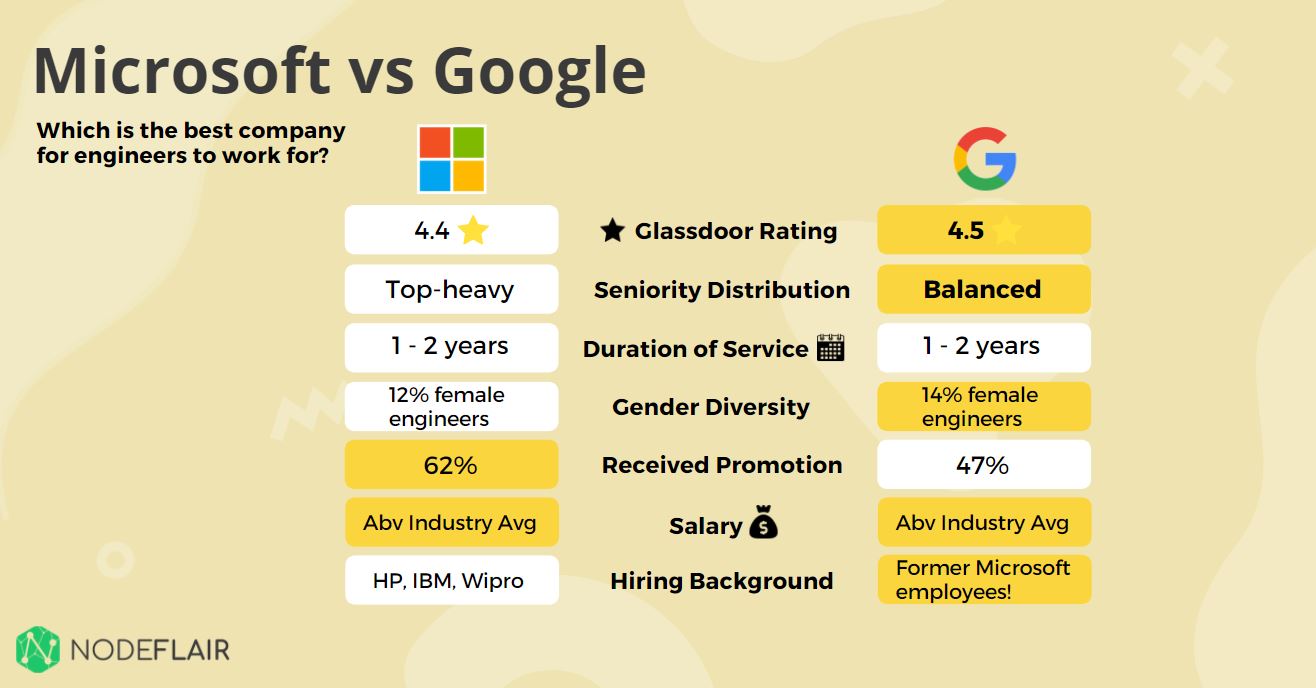 When writing this article, I, the mystery writer, had to Google ‘what is Microsoft’s search engine’. If this doesn't foreshadow the results of this article, then I don't know what will. Ok, back to representing NodeFlair’s voice with ‘we’ instead of ‘I'!

In this short article, we compared the two companies to see which of these two tech giants is the better company to work for.

TLDR: Is Microsoft better than Google?

If you want us to get to the point so you can get a head start on your job application, here’s the short answer: Google wins.

To understand how we came to this conclusion, read on!

A window pops up, explaining the data source, methodology, etc.

What is the average salary for Engineers in Singapore’s Tech Industry?

Based on our real-time Market Insights feature, here are the average salaries for Software Engineers, QA/Testing, and Cybersecurity Engineers in Singapore’s Tech Industry.

How much does Microsoft and Google pay its Software Engineers in Singapore?

Due to a lack of verified salary data, we won’t be scoring this. However if we were to zoom in on the salaries for Senior software engineers, Both companies seem to pay above the industry average, with Microsoft reportedly paying more than Google.

Without verified salary data, it would be hard to score this round. Submit your salary today to help us make salaries more transparent within the industry!

Glassdoor Ratings of Microsoft and Google

Both Microsoft and Google did well for this round, with both scoring above 4 for their Glassdoor Ratings. This is definitely a good sign of a positive working environment!

Google takes the cake for this one, beating Microsoft with a score of 4.5, compared to the latter’s 4.4.

Seniority Distribution of Microsoft and Google

Both Microsoft and Google are very different when it comes to the Seniority Distribution of their tech teams.

Microsoft has a very senior team, with the bulk of the team having more than 10 years of experience. If you’re in a junior position, this might be a sign of having expertise within the team that you can tap on.

Or is it a sign of a top-heavy and rigid organization structure? Who knows.

Google’s team seems to be more balanced compared to Microsoft. Although they have more senior members, there’s also a fair mix of mid level team members to help even things out

This round goes to Google due to their more balanced team structure.

Duration of Service of Microsoft and Google employees

Although both teams are made up of mostly senior level employees for their tech team, it appears that both teams have relatively new teams, with a bulk of them having been with the company for less than 2 years.

One way to look at this is that both teams might be expanding, and hence are rapidly hiring to meet their needs. This is good news if you’re looking for jobs within these popular companies.

Throughout our comparison articles, we’ve observed that most tech teams are male dominated environments, but that does not mean that women do not have a place in tech too!

Both Microsoft and Google have 12% and 14% of female engineers in their teams, which is roughly the percentage that we observe within companies.

Google wins this round with 20 more female engineers in their team than Microsoft.

How often do Microsoft and Google promote their employees?

While the data on NodeFlair Insights only reflects title changes amongst the tech team. This usually correlates to a promotion.

In this instance, although Google has promoted 93 of its tech team members as compared to Microsoft’s 43 promotions, Microsoft takes this round.

Why? Because overall, Microsoft has a smaller team and has promoted 62% of its team, compared to Google’s 47%. That’s more than a 50% chance of a promotion if you’re working in Microsoft!

Microsoft wins this round!

We won’t be scoring this portion but from the looks of it, A majority of Google’s Tech Team are made up of former Microsoft employees! Juicy indeed.

Microsoft vs Google: Which is better?

Although Google edges Microsoft with a score of 5-2, this is purely a comparison from the statistics that we have. We’re simply compiling the data and presenting it to you without any bias, as much as possible.

Ultimately, it’s up to you to pull from this comparison and make the right career decision for yourself.

Let us know what you think!

Insight
|
Shopee is hiring over 400 Engineers in Singapore: Here’s an insight into the company
Shopee is hiring! Read this article to find out more about working in Shopee.
Insight
|
How Should You Decide If An Engineering Manager Role Is Right For You?
Learn more about the transition to becoming an Engineering Manager.
Insight
|
Ninja Van and Carousell: A tech insider into what makes these Singaporean companies successful
We dived in to explore what makes Carousell and Ninja Van successful.