A Singlish Guide for Non-Singaporean Developers 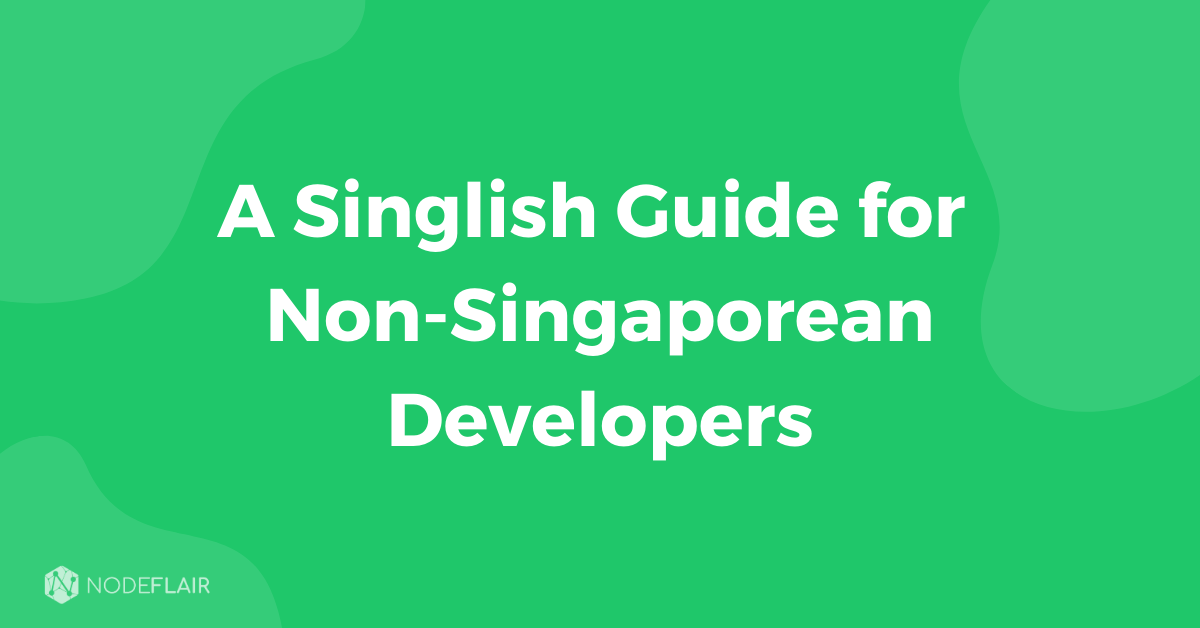 Upon arriving in Singapore, you may notice that the English language sounds a bit different. Why is everyone saying “lah” all the time? What does “wah lau eh” mean?

English is the main language used in school and at work in Singapore, and has become the city’s most commonly spoken language. British English is adopted as the main English standard as a legacy of the country’s time as a British colony.

Even though English is not a language of a major ethnic group in Singapore, it was adopted to unify the multicultural community speaking their own mother-tongues. It was also a practical option to aid the country’s development and growth on an international level, since English is the global language used for administration, business, science and technology.

While English is one of the official languages (aside from Malay, Mandarin & Tamil) of Singapore, Singaporeans have over time adapted the language by applying expressions taken from their ancestors mother-tongues. The result? A mixture of Singaporean slang and English, called Singlish.

As someone moving to Singapore soon (or maybe you've been here awhile but not sure what is going on), we thought it might be useful for you to know some basic Singlish to understand the lingo, which could also be a conversation starter!

Here’s a list we made of popular Singlish words and expressions, used in common developer phrases.

Originated from Hokkien. “Wah lau” is translated to “Oh my Dad”, and the “eh” is added to enhance this. The expression is commonly used to profess surprise or that something is stupid, can be compared to “Oh my God!”.
‍

Probably the most common expression, used as a sentence complement, often applied in the end of the sentence to make the sentence sound a bit more casual or for pragmatic functions such as indicating tone.

Singlish’s own version of “a piece of cake”. This expression is used to describe a task which is perceived to be easy, or a problem that can be solved easily. Similarly, when something is described not to be “chicken feet”, it entails that the task is difficult.

Just like the English term, “can” means “to be able to”. However, in Singlish it is used more efficiently and with more confidence. Instead of answering “yes, I can do that” you just reply with “can”.

“Ah Then?” is used as a sarcastic response given to obvious statements or questions. It can be compared to the English slang “duh” or “ofcourse, silly”. Another iteration of this phrase is "Ah Bu Then".

The term originated from Cantonese, meaning to take away food, to order take-away. Simply replace “take away” in a sentence, like “One Chicken Rice please, da bao”.

The term originated from Hokkien and Teochew and is used to describe a terrible situation, when something you don’t want to happen has happened. Is equal to “Oh no!” or “Dear God!”.

Simply means coffee. However, if you order a simple “kopi”, be ready to receive it with lots of condensed milk and sugar. If you like your coffee black you should order “kopi-o”, and if you prefer no sugar, order a “kopi kosong”. A hot black coffee without sugar becomes “kopi-o kosong”, but if it’s a hot day you might instead order “kopi-peng” - coffee on ice.

Yaya Papaya is used to describe a proud person or a person exhibiting arrogance. Papaya was most likely used to pair with yaya (show-off, proud) because of their similar pronunciation which makes the term extremely catchy.

A Hokkien term that literally translates to beautiful. Usually used in agreement or approval, it has a very strong positive connotation. The word can be used to replace nice, or perfect.

Now that you have increased your Singlish vocabulary, you are ready for Singapore! If you are still in the midst of deliberating whether moving to Singapore is a good move, you can check out our Cost of Living Guide (2020)

Still confused about the language?

Fret not, here are some other links that can inform you better about this uniquely Singapore language.

A Guide To Singapore's Languages

Thank you for taking time to read our blog article. If you have a little more time to spare, why not check out our newly launch product, NodeFlair Jobs. Browse thousands of available tech job opportunities as well as diving into insider team data of tech companies! Click HERE.

Pulse
|
Get Inspired With These 5 Developers’ Work From Home Desk Setups
Get inspired with these aesthetic and productive developer home desk setups as we do a breakdown of the furniture and hardware that best suits your needs.
Pulse
|
10 hilarious TikToks about life as a software engineer
Have you heard of #softwareengineer TikTok? If it hasn’t popped up on your For You page, you may be missing out on awesome tech content.
Pulse
|
This software engineer coded the perfect Mother’s Day gift
Varick Lim created a Telegram chatbot for household chores to lighten the load for his mum, the perfect Mother’s Day gift.